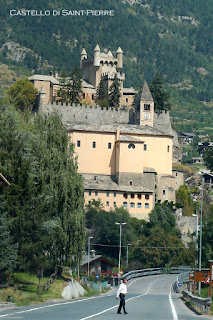 Counting castles...what we need now is a lively jousting event and fair maidens. Valle d'Aosta is the land of castelli (castles), and spotting them is almost like engaging in a game of punch bug. I felt that it wouldn't be right to leave out such historical detail, but the sharp contrasts...you'll see what I mean in the photos.

Now I don't know if it's due to Walt setting the standard on what a castle should look like, but through the dozen or so times that I've been here, not once did I make any real effort to appreciate these medieval landmarks that have withstood the test of time - save one. That would be the Castle of Sarre (3rd image), where we had our wedding photos taken. I believe that most castles are open to the public, and further info can be found here at Valle d'Aosta Castles. The Disneyish-looking one is Castle Saint Pierre (at right). It's a small world after all. 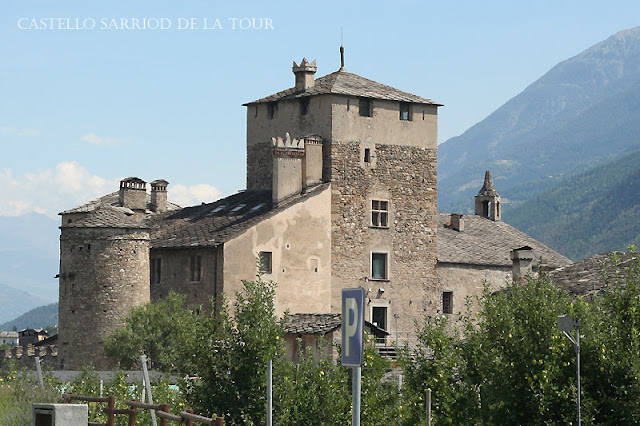 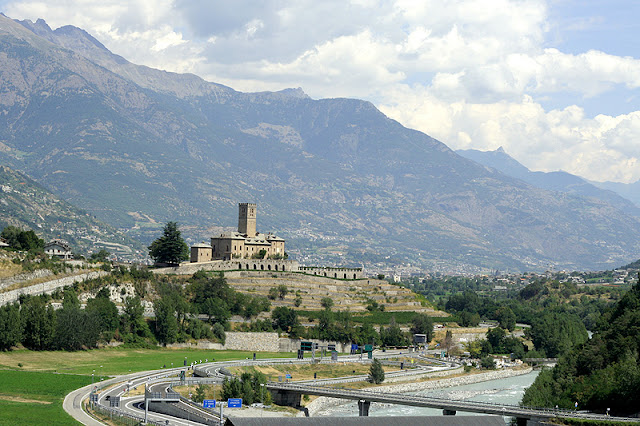 I can only imagine what Sarre's royal landscape must've looked like centuries ago, long before the invention of the autostrada.

italyMONDO! said…
You're so right! It think it's because there are so many of them that you start to take them for granted when living in Italy.

I just started to "keep an eye out" for them recently, and have discovered that many of the abandoned hilltop castles in the South allow for some fantastic "viste" - and great hikes to burn off all that Italian food, too :-D
6:50 PM, August 30, 2009

Rosa said…
We have quite a lot of castles here in Luxembourg too - paranoid folks. Positano doesn't have castles in the air, but fortresses guarding the seas from the Saracen pirates.
8:25 PM, August 30, 2009

Anne in Oxfordshire said…
Hi Rowena, wow this looks fabulous. I really must stop reading Italian blogs, as I cannot make up my mind where to go!!

Only joking I will continue , so hard where to decide for next visit!!

Fern Driscoll said…
Looks like you chose the best for your wedding photos, The Sarroid della Tour looks like lesser nobility to me. There are so many things one sees here that makes one stop and imagine what it was like 500 or 1000 years ago... Thanks for the pic tour of Aosta!
10:12 PM, August 30, 2009

Rowena said…
italyMONDO - indeed, as I have taken for granted the beauty that is the Hawaiian islands where I'm from! It is all too true, and since Italy has so many, many charms, at times I need to turn off the 'sensory units', otherwise I go into "Oh my god I can't believe how gorgeous this country is" overload.

Scintilla - I like the idea of fortresses, and pirates (and Johnny Depp as a pirate). Notice that this time I didn't mention that famous guy in Como. ;-) Isn't he dating some italian showgirl now?

Anne - you made me laugh! You can't stop thinking of Italy because one day perhaps we shall meet. At a lovely cafe over cappuccino and pastries, of course.

Fern - to demonstrate how far I've come in the land of ancient things, would you believe that the idea of posing at Sarre didn't even phase me one bit? Ok, maybe it's because all I cared about was saying "I do", but we could've just stayed in Aosta centro for the photos.

I bet that I'm the only island gal to have shuffled in my slippahs through the long corridors of the Castello di Sarre!
10:50 PM, August 30, 2009

Brad Farless said…
This reminds me of when I was a kid living in Germany. There were quite a few castles there and we would even go to them on school field trips. I miss that. I'm looking forward to the next time I'll be able to visit Europe and look around old castles.
8:03 AM, August 31, 2009

Rowena said…
Debi - I know :-( ...either too self-centered or just plain losers.

Carla - possibly because the maidens decided to better their stance in this world. All that shining armor must get awfully noisy after awhile. ^-^

petra michelle; Whose role is it anyway? said…
I share the same passion, Rowena! While I lived in Scotland, there were castles in every town! They're everywhere in Europe! Some can be found on the east coast of the United States, and in Canada! They're so regal! Loved the tour, Rowena! Grazia! :))
3:02 PM, August 31, 2009

Barbara said…
Sarre ! Didier & I went up there and sat behind the castle, just soaking in the view.
We enjoyed the view so much.I remember the lovely,lovely vineyards nearby the castle. This is a wonderful wine & fruit region... ( D sampled some pears on a rainy day when no one was looking ;) )
6:57 PM, August 31, 2009

Rowena said…
Sophie, Scott - now I've really got it into my head that I should get out there with my medieval gown. Ha!

Petra - a visit to Scotland is a dream that I hope will come true...and soon. Castles and whisky!

Rowena said…
Kat - I'm researching medieval stuff in Italy, and hope to find some kind of jousting event. There just has to be one!
11:21 AM, September 05, 2009

Fun in the sun and snow at Alpe Giumello

December 13, 2010
Why do weekends with perfect weather always have to be so short? This past Saturday and Sunday was the one that anybody with a pulse has been wanting for a long time, the weekend with ZERO rain, no snowfall and nothing but blue skies all around. We had the intention of hiking around the base of Monte Muggio, a 3-hour loop trail that begins from the parking area at località Alpe Giumello, but ice on the trail made it a dangerous gamble. If we had been able to get to the very top of Monte Muggio it would have afforded us a spectacular panorama with Bellagio jutting out in the middle of the lake. Even if a good, long hike was out of the question, there was plenty of wide open space to go for a stroll. We walked the dogs out on the flat plains on the eastern side of Giumello, all of which were covered in a thick layer of packed snow. In less than 30 minutes time we had built up enough of an appetite for a quick lunch at Ristoro Genio, a cozy little bar and restaurant serving hot meal
14 comments
Read more