Monte Bianco and the Giant's Tooth

Panoramic view as seen from the charming town of Pre-St-Didier in Valle d'Aosta.
Monte Bianco on the left, the Giant's Tooth on the right, signaled by an arrow.

3rd day, Courmayeur — The big alpine blue. It just takes your breath away. The sun is mercilessly harsh at this altitude, and the mighty Monte Bianco has to be one of the most impressive of natural wonders in Italy. We were nearing the region's northern border again, avoiding the Mont Blanc tunnel leading into Chamonix, France, and getting close enough to gaze in wonder at what is known as the 11th highest peak in the world. She is majestic at 15,781 feet above sea level, and therefore demanding the sort of climbing skills way beyond our experience.

We'll probably never visit during the busy ski season but there's one unique feature that nature buffs would appreciate - il Dente del Gigante - the Giant's Tooth. Second in popularity to Monte Bianco, this "tooth" is surrounded by myth for which I share an adaptation of the original. The giant in this case is Gargantua (of François Rabelais lore, not the japanese version). Upon his death, arrangements had been made for his tooth to be thrust into the icy white of Monte Bianco. Legend has it that within the tooth malicious spirits are desperately trying to escape. Let's hope they never do. 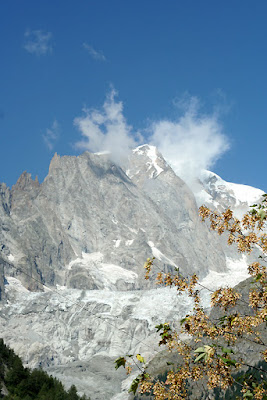 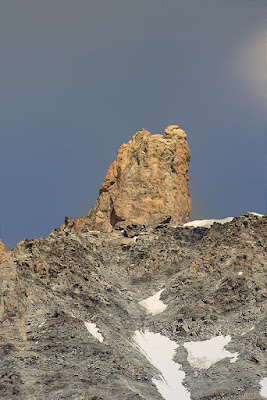 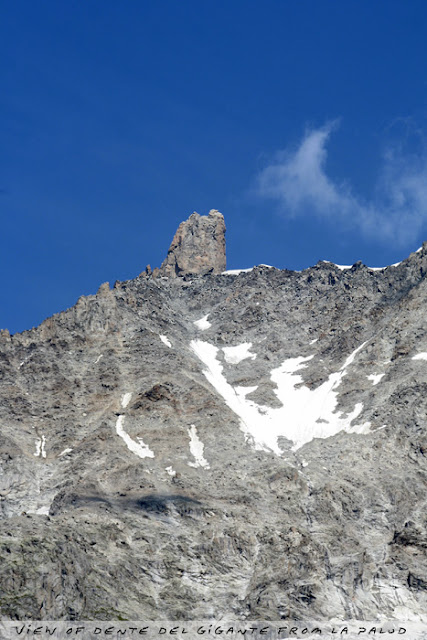 Once upon a time evil spirits roamed free in Valle d'Aosta. Desperate to be rid of such miserable trouble, the populace sought help from a magician in a faraway land. Moved by the people's distress, the magician went up into the valley uttering strange words, luring the attention of the unholy beings. They swarmed down the mountainside in large numbers: from the ravines, from the forests, from streams and rivers formed by the melting snow. Unable to resist the magician's pull, they followed as he led them all to Monte Bianco. Once there, the spirits were thrown into an icy abyss by an unseen force, to be imprisoned forever with the door of the Giant's Tooth.

A section of the Grandes Jorasses, northeastern range of the Monte Bianco massif 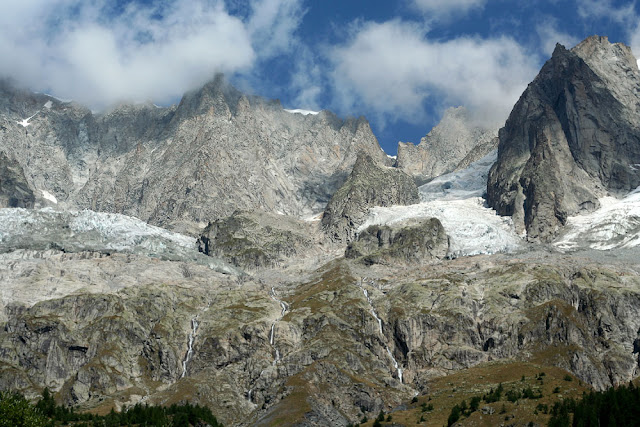 Rosa said…
I have only ever seen this from a birds eye view, flying over with the plane. Always breathaking!
8:43 AM, September 02, 2009

casalba said…
Sorry to be repetitious, but those photos... stunning, breathtaking and all that jazz. Great job, Rowena.
9:21 AM, September 02, 2009

Aoste is a special place for D & I too.
I've always related very well with mountains since I've been in Europe. There's a special energy & feeling up there.

Rowena said…
Amber - my jaw must've dropped a meter gazing up at this place. It suddenly makes you realize how tiny we are in the whole scheme of things.

Peter - a shame that we didn't hike anywhere near here, but at least now we know better to go when the temps are a bit cooler. Truly awesome area!

Scintilla - at some point while taking in the scenery, I wished that I could fly like Superman!

Casalba - thank you kindly, but the next time I hope to be shooting from the top instead of the bottom. ^-^

Barbara - I couldn't agree with your more on that sentiment. Majestic, mighty, marvelous...there simply are no words that truly capture the emotions that these mountains bring out in me.
10:23 AM, September 02, 2009

Brad Farless said…
That's definitely some beautiful scenery. I've always enjoyed walking about in the woods, or, when I lived in El Paso, on the mountains.

Anonymous said…
Your pictures are stunning - so hard to take good photos of such big scenery, but you really capture the feeling. Love the story, too...
10:07 PM, September 02, 2009

Farfalle - thank you ma'am, and you are so right on scenic photography...it seems almost ridiculous when trying to resize them into a more manageable upload.

Anonymous said…
The pictures are gorgeous! It reminds me a bit of Patagonia.

August 30, 2009
Counting castles...what we need now is a lively jousting event and fair maidens. Valle d'Aosta is the land of castelli (castles), and spotting them is almost like engaging in a game of punch bug. I felt that it wouldn't be right to leave out such historical detail, but the sharp contrasts...you'll see what I mean in the photos. Now I don't know if it's due to Walt setting the standard on what a castle should look like, but through the dozen or so times that I've been here, not once did I make any real effort to appreciate these medieval landmarks that have withstood the test of time - save one. That would be the Castle of Sarre (3rd image), where we had our wedding photos taken. I believe that most castles are open to the public, and further info can be found here at Valle d'Aosta Castles . The Disney ish -looking one is Castle Saint Pierre (at right). It's a small world after all. Parking sign [P] and picnic tables (not shown) in front of Cast
19 comments
Read more

September 06, 2010
We really couldn't have asked for more on this particular outing. The trail in Val Vertova is full of beautiful scenes like this, where you have the option of taking it easy all the way to the end or stopping in an idyllic spot to soak up the sun. I've never seen perfectly tanned boobs in full display until this hike, but with such an inviting environment, why the heck not? View larger map To get to the starting point: from Vertova, follow Via Cinque Martini until località Lacni. Instead of following the right bend in the road, take the left for about 300 meters until the parking lot (B). If it's full, space is available at the headquarters of Gruppo Alpinistico Vertovese (GAV) a hundred meters going back and across the stream (A), but only if the gates are open. It takes about an hour to reach the end of the trail. For a challenge, head up the n.527 that climbs the left just before reaching the end. It quickly leads back down to the river then continues into drier
11 comments
Read more