Thanksgiving Saturday: the Day After

Well actually 2 days after, because if I had been obligated to post on Sunday, you all might've been treated to another photo of the Krampus. Six hours ago I waved goodbye to the last of our visiting guests, and the big question of course, is how did our Thanksgiving go? It seems like the most commonplace, mundane thing to ask each other and we do so every year, but for us, or at least for me, it is a question where I can happily say that I was able to enjoy it with a whole bunch of people under one roof. The Thanksgivings that I remember in Hawaii were always outdoor affairs; buffet tables and makeshift seating set up in the garage or in the backyard patio; an uncle making pulehu (barbecuing) on the grill; coconut trees swaying in the breeze; CHOKE food (that means lots of food). It was an event where you could savor dishes from nearly every ethnic group in Hawaii as each family has their own "melting pot" of relatives: filipino, chinese, japanese, portuguese, puerto rican, korean, caucasian, hawaiian and italian! It was also an event that I had been too gutless to try to pull off until now.

Minus a couple of glitches in the kitchen, everyone got to eat the 14½-pound turkey and some laulau that I had made earlier in the week. I know it was insane to host 15 people at ours, but when it comes to parties I tend to lose count. In the end we were 13 in total. Sorta like the Last Supper? I made the usual mashed spuds, sweet potatoes, baked stuffing casserole and cranberry sauce. A couple of friends who stayed for the weekend contributed with a wonderful vegetarian lasagne. On the hawaiian end of the menu, I made lomi lomi salmon to go with the laulau, and served maki sushi and rainbow roll sushi for apps. The plan for fufu drinks went out the door as there simply wasn't enough space or time to be going tropical, yet with the amount of wine and alcohol that came presented to us upon each guest's arrival, we had more than enough to sing Tiny Bubbles if we had wanted to. Sorry, no hula! Not this time anyway. 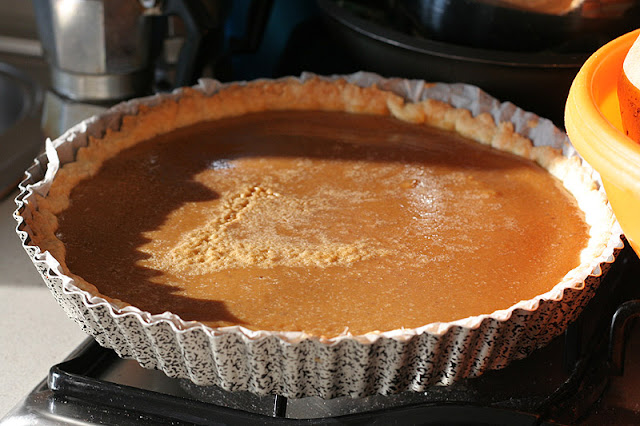 So that leaves me with the photos, and perhaps you've already wondered where the heck are they, but now is the time where I'll admit to having dropped the ball BIG TIME because I really have none to share. I forgot to ask someone to photograph the event, and the only picture I managed to take was the sweet potato pie right after it came out of the oven. The turkey photo comes borrowed from last week's Thanksgiving hosted by Slippah Time authors. Just as well, because their turkey was much more beautiful than mine anyway! 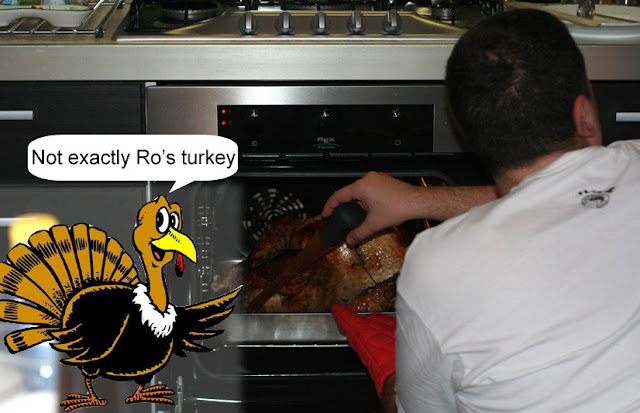 Marti said…
Yes, she definitely was cooking up a storm! Thanks for being such good hosts, we had a really good time! And sorry we didn't take any pics either...
10:23 AM, December 01, 2009

Rowena said…
Anne - and that is my one consolation for which I'm happy to have been able to enjoy. Next time I'll make sure to invite a foodie photographer!

Kat - I believe we opened the first bottle of wine at 4pm or so, and it just never stopped! It's incredible that I was still standing on my feet to finish the last-minute cooking, but then I had good experience from my work past. ^-^

RONW said…
indeed, it's not absolutely necessary to run around taking photos at your thanksgiving party for the expressed purpose of posting them later on your blog. IMHO.
11:13 AM, December 01, 2009

Rowena said…
Marti - I've just seen a recipe for cranberry rice pilaf....hmmmm...I may have to freeze some of those crans that you gave us for next year!

RONW - oh yes it IS! Especially for the first one because, “Well, isn't that special?” (cue voice of Dana Carvey aka Church Lady here). And also in the same line of thinking as for the first child (there are way more photos of me than of my siblings), the first date (I threw those away), and the first kiss...errrr...ehhh...maybe that doesn't count here unless you're some paparazzo stalking the latest Hollywood preteen star.
11:44 AM, December 01, 2009

Rowena said…
RONW - fortunately, no uninvited guests snuck in only to brag about it later on Facebook.
2:38 PM, December 01, 2009

Rowena said…
Nate - how did you know??!! He attacked our two guests that stayed the weekend, but he was in full muzzle gear and did not cause any fatalities. You should have heard him when everyone arrived (he was locked in the bedroom). I'd wager that he was thoroughly PISSED at the thought of strange people in HIS house.

Sonia said…
Oh, I am so sorry about the photos...I really ment to bring my camera but totally forgot! It is a pity, but anyway I am sure that we won't forget the lovely time we spent together and also the great food..you are an artist! (I wish I could be able to explain how the cheesecake tasted like...) Konia and Papio
10:24 PM, December 01, 2009

Anonymous said…
It sounds like you had a delightful time. I hope you had help with the dishes.
Someday I'd love to share a meal with you someday, albeit in Washingon state, Hawaii or even Italy. what say?
1:53 AM, December 02, 2009

Rowena said…
Carlo - around this time of year I am always reminded of you because of the panettone and that you used to work in Milan! I'll try to visit xanga more often.

August 30, 2009
Counting castles...what we need now is a lively jousting event and fair maidens. Valle d'Aosta is the land of castelli (castles), and spotting them is almost like engaging in a game of punch bug. I felt that it wouldn't be right to leave out such historical detail, but the sharp contrasts...you'll see what I mean in the photos. Now I don't know if it's due to Walt setting the standard on what a castle should look like, but through the dozen or so times that I've been here, not once did I make any real effort to appreciate these medieval landmarks that have withstood the test of time - save one. That would be the Castle of Sarre (3rd image), where we had our wedding photos taken. I believe that most castles are open to the public, and further info can be found here at Valle d'Aosta Castles . The Disney ish -looking one is Castle Saint Pierre (at right). It's a small world after all. Parking sign [P] and picnic tables (not shown) in front of Cast
19 comments
Read more

September 06, 2010
We really couldn't have asked for more on this particular outing. The trail in Val Vertova is full of beautiful scenes like this, where you have the option of taking it easy all the way to the end or stopping in an idyllic spot to soak up the sun. I've never seen perfectly tanned boobs in full display until this hike, but with such an inviting environment, why the heck not? View larger map To get to the starting point: from Vertova, follow Via Cinque Martini until località Lacni. Instead of following the right bend in the road, take the left for about 300 meters until the parking lot (B). If it's full, space is available at the headquarters of Gruppo Alpinistico Vertovese (GAV) a hundred meters going back and across the stream (A), but only if the gates are open. It takes about an hour to reach the end of the trail. For a challenge, head up the n.527 that climbs the left just before reaching the end. It quickly leads back down to the river then continues into drier
11 comments
Read more